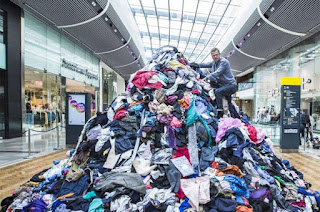 I have some T-shirts that I probably got over 20 years ago. I don’t replace my blue jeans until the knees are worn out (which for some would be a fashion statement) When I was a kid, I used to patch them up with denim from even older jeans. In the 70s, that was an OK thing to do.

I try not to buy clothes unless I really need them, which maybe makes me unusual (or just a typical American male?). Even so, I think I still have more clothes than I need when I look in my closet.

Why am I telling you about my sartorial deficiencies?

What inspired this column were studies done by Patagonia, the Ellen MacArthur Foundation, the United Nations and others which estimate that the amount of clothing manufactured worldwide doubled between 2000 and 2015, but the number of times an item was worn has actually decreased by 36%. Clothing is considered disposable. Worldwide, over $500 Billion in perfectly good clothing is thrown away each year, one garbage-truck every second.  73% of clothing ends up landfilled or incinerated. By any measure – this is an insane waste.

$500 Billion is just the retail price. Then you have to consider the factors like raw material to make the fabrics, the dyes, the energy to manufacture the clothing, the transportation costs. Environmental impacts, detailed in a peer-reviewed post in Climate Feedback, include “’ . . . intensive water use, water pollution through dying and textile production, and pesticide and herbicide pollution through the agricultural production of cotton. Microplastics, which are shed primarily from synthetic textiles during washing, are also polluting the oceans, potentially negatively impacting human health and natural ecosystems.”

According to the study, “total greenhouse gas emissions from textiles production, at 1.2 billion metric tons annually, are more than those of all international flights and maritime shipping combined” which is between 8 and 10% of global annual emissions.

So, what’s the solution? A rethink of the whole textile and fashion industry: “Making Fashion Circular”. The three components of this concept are 1 -design products to be used more, 2 – make them in a way “to be made again” and 3 - make them from safe, recyclable or renewable material.

“Used more” means “manufactured to last”. Garments should be easier to repair and users should have the ability to maintain their purchases.  You can extend this concept to renting instead of owning clothing.

“Made to be made again” means that garments should be made to be easily disassembled, allowing material reuse, remanufacture, recycling and ultimately, composting. The fashion and textile business would need to support the infrastructure to make this process happen.  Governments would also have to support this concept via regulation, policies and promotion of the recycling infrastructure.

“Made from safe, recyclable or renewable material” means textiles do not contain or are made from hazardous materials which can make their way into the environment. The manufacturing process, supply chain and associated technologies would focus on optimizing resources and minimizing waste, including use of recycled material.

This transition would require a partnership of both the fashion business and government, a lot of innovation, “transparency and traceability” and of course, money, also known as “investment”.

But as I think about it - why stop with clothing? The circular model could apply to cars, electronics, appliances and most any other consumer good you can think of.

Our modern material economy is linear. Raw material to product to waste. The manufacturer has no responsibility once the product leaves the factory. That’s up to us consumers. In this linear model, resources to make stuff are considered infinite.  Places to dispose of them as well. The problem is, they aren’t.

A circular economy would be material to product to material until the material could no longer be used. Waste would be minimized. Manufacturers would be on the hook to work with government to recycle products, and vice versa. On the flip side, manufacturers would get a head start on the fabrication process because they would not have to start with raw material, they’d just have to reprocess what they’d already made before.

We would no longer be “consumers”, we would be “users”. We would be part of the process, but so would businesses and governments.

A circular economy is an alien concept, but with the world’s population at 7.8 billion today and 10.9 billion by 2100, and everyone wanting the kind of lifestyle we Americans take for granted, a linear economy is no longer an option.  It’s not sustainable.