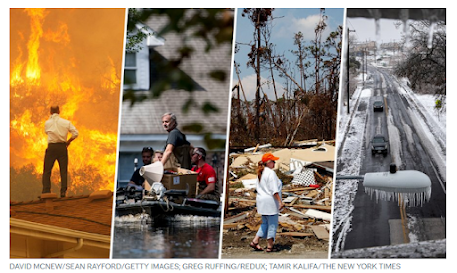 You know it’s bad when the AARP Bulletin has an article entitled "What you Need to Know About Climate Change” with a subtitle of “How it’s already affecting your health, home and safety – and what you can do about it.”

The articles suggest ways to adapt. Your air is choked with wildfire soot? Get a better air conditioner filter. Planning to retire in the sunbelt? Maybe Toledo is a safer place. Possibility of power loss is growing? Buy a backup generator. Your bucket list travel destinations are endangered (think Glacier National Park)? Don’t put that trip off. The list goes on.

According to Market Watch, the median American household has $11,700 in savings. The bottom 20% of households have no savings. The Economic Policy Institute states that about 50% of families have no retirement savings. Of course, the numbers skew even lower the less education you have or your race. Picking up and moving, or buying a better air conditioner (let alone having one in the first place) is a luxury for a lot of Americans.

There is no doubt that people lower on the economic rungs of our country are now struggling with the social and economic impacts of the long-predicted increase in extreme weather events. Second and third world countries have been dealing with impacts for a couple of decades now. We just don’t hear about it much.

But the affluent are no longer immune. Take this headline from the July 18th edition of the Boston Globe: “’No one is safe’: Extreme weather batters the wealthy world.” A sentence in the article struck me: “The extreme weather disasters across Europe and North America have driven home two essential facts of science and history: The world as a whole is neither prepared to slow down climate change nor live with it.”

Seattle, home of Amazon, broiled at the end of June, with temperatures exceeding 35 F above normal. Germany, the most affluent and industrialized country in Europe, suffered extreme flooding unlike any in living memory. Both were due to stagnant weather systems which used to be rare but not anymore. Both caused the deaths of hundreds of people.

Most of us living in the fairly affluent suburbs and exurbs of Boston are probably not too concerned about catastrophic floods, raging wildfires or deadly heat waves, but as events of the last few weeks demonstrate, we cannot be complacent.

As I write this, the skies above Westborough are hazy with smoke from wildfires 3,000 miles away in Oregon. Commonwealth officials have issued an air quality alert for Eastern Massachusetts. Clearly we are not immune to far-away events.

Events elsewhere can impact the flow of electricity to our homes, the food delivered to our supermarkets, the fuel for our SUVs, the cost of our insurance, and all the other little things we take for granted in our comfortable lives.

Complacency got us into this mess. It won’t get us out of it.

Posted by Andy Koenigsberg at Saturday, July 31, 2021 No comments:

It All Comes Down to Sweat 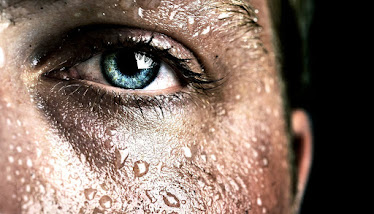 My cousin Steph and I constantly needle each other on Facebook about the climates where each of us live. She’s in Tucson, AZ. She’ll remark about how the cold water coming out of the tap is the same temperature as the hot or how her backyard weather station said yesterday’s maximum temperature 127 F. I will ask her to tell me again why she lives there. Steph replies that “you can’t shovel sunshine and besides it’s dry heat.” My comeback: “The inside of an oven set to broil is also dry heat.”

In Tucson, summer average high temperatures are in the low 100’s. Residents don’t bat an eyelash because that is the climate in the desert southwest. And it’s dry. If the relative humidity exceeds 50%, that’s sticky. Normal humidity is less than 25%. But as a friend of mine in Las Vegas tells me, “I don’t care if it’s dry heat. When it’s 120 F, it’s just [expletive] hot.” 120 F is definitely heatwave territory out that way, even if it’s dry as dust.

Here in the humid Northeast, it’s a heatwave when the temperature exceeds 90 F for three days. What gives? To paraphrase James Carville – “It’s the humidity, stupid.”

Of course, high temperatures with or without humidity will kill you. It’s the combination of both that determines deadly conditions. It all comes down to sweat.

When our distant ancestors lived in Africa 3 million years ago as it became more arid, they evolved to efficiently dissipate heat by losing body hair and increasing the number of sweat glands. As sweat evaporates from our bodies, it cools our skin. Problem is, sweat is mostly water. Since we cannot store water like a camel, when it’s hot, we need to constantly replenish the water we lose to cool ourselves.

Humans are between 55 and 65 percent water. If you sweat without replenishing water, bad things start to happen pretty quickly. If you exercise vigorously, you can sweat two pounds of water in an hour (a pound is equivalent to about a 16-oz glass of water). This means that dehydration can occur very quickly, especially if sweat rapidly evaporates. The more water you lose, the less you can regulate your body temperature. You lose 10 glasses of water; you’ll damage major organs. 14 glasses and you're dead.

You can also die from heatstroke just by sitting outside doing nothing when the real feel is 130 F. Sweat cannot evaporate, so your body temperature can rise to fatal levels in minutes.

According to an article in the Boston Globe, using data from NOAA, Massachusetts had about 4 days above 90 per year until the year 2000. Now, it’s 10. Projections range to an additional 6 to 22 days by 2050 and an additional 9 to 52 days by 2100. Imagine up to two months per year above 90. This is basically the climate of Atlanta, Georgia now and the future climate of southern New England.

These shifts are not limited to the Northeastern US. We already know what’s going on in the American Southwest. Blistering high temperatures leading to long-term drought and longer and more vicious wildfire seasons are the norm. Siberia is in a heatwave for the second year in a row, with hundreds of wildfires.

Worldwide, the projections get even uglier. According to a study published in the Proceedings of the National Academy of Science:

“. . . depending on scenarios of population growth and warming, over the coming 50 y, 1 to 3 billion people are projected to be left outside the climate conditions that have served humanity well over the past 6,000 y. Absent climate mitigation or migration, a substantial part of humanity will be exposed to mean annual temperatures warmer than nearly anywhere today.”

The increase in land area subject to heat/humidity levels which make it life threatening just to be outdoors will span major portions of southern Asia within the next few decades, where clean water and air conditioning are an extreme luxury. Currently, we see a few days of such conditions in this region, but they are predicted to span weeks in the coming decades. Those billions in less developed countries will simply not be able to adapt. They will move.

What could possibly go wrong?

Published in the Village News (Massachusetts), July 1, 2021
Posted by Andy Koenigsberg at Saturday, July 10, 2021 No comments: