Black Swans in the Middle of Winter

A black swan is supposed to be a very unlikely and unexpected event. Something like temperatures above 32 degrees F at the North Pole in the middle of winter.

The high Arctic has not seen the sun since the Autumn Equinox, which occurred on September 22nd.

Yet on December 23rd, 2016, the temperatures recorded near the North Pole were 50 degrees F above normal, or about 32 degrees F, just a couple of degrees cooler than it was in Westborough that day.

Try to wrap your head around that one. It’s about as bizarre as having the ocean freeze at the equator on June 22nd. How about this? Same thing happened last year at this time.

When unlikely and unexpected events start to repeat themselves, they become neither.

The Arctic Report Card put out by the National Oceanic and Atmospheric Administration (NOAA) for 2016 reads like this:
2016 will go down as the hottest year globally since instrumental records started being kept over a century ago, slightly hotter than 2015, which beat 2014, which beat 2010 and so on. All the hottest years on record have occurred since the turn of the century.

Another little event is going on at the other end of the planet as I write this, in a region called the Antarctic Peninsula. It is an arm of Antarctic that extends north towards the southern tip of South America. Thus it is the most northerly part of that continent, equivalent in latitude to central Alaska in the northern hemisphere.

A 1,000 foot wide crack is rapidly progressing through an 1,000 foot thick floating ice shelf on the Antarctic Peninsula called Larsen C. When (not if) this crack connects to the ocean only 12 miles away, the ice shelf will calve an iceberg the size of Delaware.

So why should we care?

These ice shelves keep the glaciers on land from flowing into the ocean. The best analogy I can think of would be akin to a carefully constructed pile of oranges at the supermarket. Pull out an orange near the bottom of the pile and the whole thing collapses.

There used to be Larsen A and Larsen B ice shelves too, but they disintegrated 1995 and 2002, respectively. If the entire Larsen C ice shelf collapses, the glaciers behind it could raise sea level about four inches when they subsequently flow into the ocean and melt.

This one iceberg from the Larsen C ice shelf will still leave plenty remaining, but given that the entire Larsen A shelf collapsed in a matter of hours, scientists are monitoring the health of Larsen C closely.

The other Larsen shelf collapses all started with the calving of large icebergs.

My last observation for the beginning of the New Year is a study just published by climate researchers at UMass Amherst that I first heard about in the Boston Globe (and yes, I actually read the journal article).

What does that mean for us?

Warmer and wetter winters in New England, but hotter summers. Also, more heatwaves, or as the authors put it “a substantial increase in summer temperature extremes in the US before global warming reaches 2 degrees C”.

Based on data from the Blue Hills Observatory I downloaded from NOAA, Eastern Massachusetts may already be 1.5 degrees C above where we were in 1900.

I am not planning to sell my snow blower just yet, but I am also not planning on retiring to Florida either. At the rate things are going, I won’t need to. 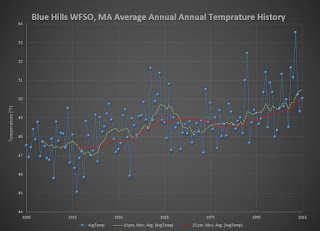 Posted by Andy Koenigsberg at Monday, January 23, 2017 No comments: