“Facts are stubborn things; and whatever may be our wishes, our inclinations, or the dictates of our passion, they cannot alter the state of facts and evidence.” -John Adams, lawyer, diplomat, statesman, political theorist, Founding Father, and Second President of the United States

A few days ago, the following simple statement of fact was deleted from the Twitter account of the Badlands National Park. 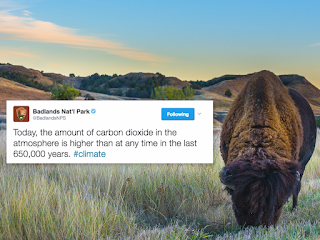 Since Donald Trump’s election last November, scientists and researchers have been scrambling to download and mirror as much raw data and research results from Federally-funded web sites and public data sets as they could, because they feared what the new administration would try to do.

So, the deletion of this tweet seemed to confirm these fears. It was taken by many environmental activists, politicians, and federal employees as the first salvo in a campaign to suppress the dissemination of climate science information and related data by the new administration.

It was not hard to see why people would come to this conclusion, given statements by President Trump and his nominees, as well as his chief of staff, Reince Priebus who considers climate change “a bunch of bunk.”

After the new administration removed all mention of climate change from the White House and State Department web sites, froze the social media accounts at NASA, EPA, and the Department of Agriculture, and then stated its plans to remove climate change web pages from the EPA web site, the backlash was immediate.

The “Twitter rebellion” started when “alt” versions of official federal agency Twitter accounts, over 80 in all, started popping up, such as @AltUSNatParkService, @Rogue NASA, @ungaggedEPA, even @RogueDeptOfEducation. “@NOAA (uncensored)” described itself as the “Unofficial ‘resistance’ group for NOAA. We are dedicated to the understanding and stewardship of the environment.”

The backlash and media attention garnered by the Trump administration’s actions have, ironically, made EPA’s climate change pages extremely popular in the last two weeks.

Another result is that plans to remove climate change web pages from the EPA web site have since been scrubbed, according to the Post.

There seems to be nothing that makes something more popular than telling folks that it will soon be unavailable. I am happy to report that apparently, this goes for facts, as well.

There has been a lot of discussion about how we are now living in a “post-fact” era or that there is such a thing as “alternative facts.”

I think it is bizarre in the extreme that anyone would think that making these facts unavailable will change anything.

Published in the Westborough News, February 3rd, 2017
Posted by Andy Koenigsberg at Sunday, February 05, 2017 No comments: