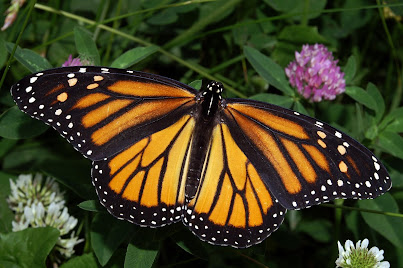 The other night, I watched a short documentary about John J. Audubon, after whom the National Audubon Society is named. His life’s work was to make a complete pictorial record of all species of North American birds. He was a detailed observer of nature, keenly aware of the world around him.

One portion of the film struck me. During his later journeys, Audubon noted how rapidly the American landscape was changing, how clearing and development of former wildlands had led to habitat fragmentation and disappearance of formerly abundant bird species in the space of a few decades during the early 19th century. It was the story then; it is the story now. This is what we do.

Which brings me to the Monarch butterfly. North American Monarchs are famous for their continent-spanning migrations. The eastern population mostly migrates south to Mexico and parts of Florida. The Western population flies to coastal sites in California as well as Mexico. It takes three generations of Monarchs to make the roundtrip journey. Why do North American Monarchs migrate in the first place? Scientists are still not sure. Monarchs elsewhere on the planet don’t migrate.

Monarchs are thought to have evolved in Central America over a million years ago. Their longevity means that the species survived at least eight glacial epochs during their time on Earth AND have been around longer than modern humans.

Sadly, as with many species on the planet, North American Monarchs are now dealing with the same pressures we have subjected to many other lifeforms over the centuries, because … that is what we do.

Their steep decline in North America is alarming. In Mexico, the eastern population’s overwintering number from last winter was about 45 million, compared to 250 million just 25 years ago. The Western population was down to 2,000 from 1.2 million just 24 years earlier.

What are we doing to cause this decline? Lots of things: GMO crops resistant to herbicides used to kill weeds which kill milkweed, the only plant on which Monarchs will lay their eggs; long-term drought along their migratory routes and habitat loss at their overwintering sites in Mexico, the result of illegal logging in sanctuary areas. Our rapidly changing climate also features prominently.

Although Monarchs have been able to weather climate change in the past, the rapidity of change now is another thing entirely. Monarchs are among 450 butterfly species whose Western U.S. populations have been steadily dropping for the last 40 years, according to research recently published in the journal Science. The paper concludes that warmer autumns are a significant contributor to this decline. Furthermore, it’s not enough to preserve open space, create butterfly gardens and in the case of Monarchs, plant milkweed.

The good news for Monarchs, such as it is, comes from other newly published research which noted that despite the jaw-dropping decline of Western US Monarchs observed in their historical overwintering sites, “... large populations of monarchs were found breeding in San Francisco and Los Angeles areas ...” Normally, Monarchs don’t breed at that time of year and not in those locations. The author stated that "It seems that Monarchs are evolving or adapting, likely to the changing climate, by changing their breeding patterns."  The author thought that the Monarchs could be adapting and doing it quickly.

The article also stated that Monarchs in Australia saw precipitous population declines in the 1970s. However, the species did not go extinct, it just adapted. Furthermore, this result occurred without any overt attempt at preservation, since Monarchs are not native to Australia. That’s the good news.

According to a recent paper in the Proceedings of the National Academy of Sciences (PNAS) life on Earth is being challenged in ways not seen since the extinction of the dinosaurs. The authors stated that “Nature is under siege [and that] most biologists agree that the world has entered its sixth mass extinction event.” The paper concluded that “… a biodiversity crisis is accelerating as the planet’s human population grows, increasingly exacerbated by unprecedented recent climate changes and other anthropogenic stressors. Time is not on our side, and urgent action is needed on behalf of nature.”

The beautiful, delicate Monarch may be able to dodge the extinction bullet, but that may end up being cold comfort in the grand scheme of things.