Questions with No Easy Answers 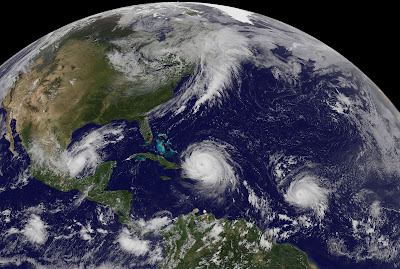 There was so much news about what is happening to the planet at the moment that it’s hard to keep up. Over the 30 day period ending the first week of September, the US had massive wildfires in California, simultaneous heat waves on the East and West Coasts, Tropical Storm Fred, and Hurricanes Henri and Ida. On top of that, July was Earth's hottest month in 142 years of modern record keeping. I'd run out of room if I listed all the other events worldwide.

Although the fast-moving remnants of hurricanes Henri and Ida blew through Massachusetts quickly, they dumped a lot of rain in a very short period of time. In Central Massachusetts, they were rated as 25-year storms, or storms that have a 1 in 25 chance of occurring in a given year (I know, it’s confusing). These storms occurred less than two weeks apart. There's no statistical reason why that cannot happen . . . but it’s happening more often.

Tropical depression Ida killed 5 times as many people in the Northeastern US, than Category 4 hurricane Ida did in Louisiana. The reason is flooding. 150 mph winds notwithstanding, the city of New Orleans was spared flooding due to its $14 billion Greater New Orleans Hurricane and Storm Damage Risk Reduction System. Northeastern Cities – not so much.

NY City got 6 to 9 inches of rain at a rate of up to 3 inches an hour. For NY, Ida was a 500-year event. The storm sewer systems, some built a century ago, could not handle anything like it, so flash floods, water fountaining from manholes, people drowning in basements or their cars, and cascades flowing into subways were the result.

NY city wasn’t prepared for Ida. It could be decades before another 500-year event hits the city . . . or not. Research by scientists at Rutgers University estimates that 500-year events may start coming every 24 years. Given that the number of Category 4+ North Atlantic hurricanes per decade have increased 10-fold over the last century, another Ida this year is not out of the question.

The reason we are not prepared for 500-year storms is because it’s a numbers game, a risk assessment. Is it worth spending to prepare for a low probability-high impact event?  Historically, the answer has been no.

Both academic institutions and government agencies have reported the trend toward more frequent and intense storms in the Northeast for over a decade. As the atmosphere gets warmer, the trend is very likely going to get worse because warmer air can hold more water. As an aside – it could also mean more intense snowfall events in winter.

Clearly, we need to recalibrate the definition of a low-probability event.

Because of Ida, state and local governments are now adamantly vowing to strengthen infrastructure and prepare for these more frequent and intense storms. Resilience! Adaptation! Cities big and small will want new protection like the New Orleans system which took years and billions of dollars to complete.

About that New Orleans system . . . outside of it, coastal Louisiana was completely devastated from floods and storm surge. In addition, the system is expected to be obsolete within the next few years, due to subsidence, rising sea levels and stronger storms.

A couple of years back, Boston evaluated building a massive system to keep storm surges and sea level rise out of Boston Harbor. Due to huge cost and quick obsolescence, the city opted out.

Resilience is about springing back to the way things were before, and adaptation is about conforming to new or changed circumstances. We will have to decide where, when and how we choose one over the other.

None of these questions have easy answers. But these are the questions we as a society need to start asking ourselves.