Are Wildfires Really as Bad as They Seem? 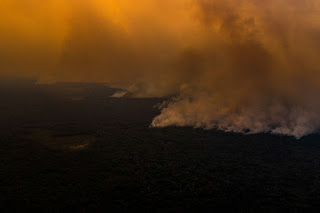 Among the topics he discussed is the prevalence of wildfires. Are there really more now than there used to be? He points to a 2014 study that says globally, fires have actually been decreasing. What he didn’t say was that the biggest declines were in the tropics. Other areas of the world? Not so much.

Even the study Schellenberger cited stated “Rising temperature and frequent droughts are becoming increasingly important and expected to increase wildfire activity in many regions of the world”. His rhetorical tactic is called taking facts out of context.

According to the Union of Concerned Scientists, in the US, twice as much land area burned per year in the last 18 years than the period from 1985 to 1999. Even worse, wildfires CO2 emissions were equivalent to 22% of carbon dioxide put in the atmosphere between 1997 and 2016 from fossil fuel combustion.

Schellenberger also stated that climate change does not cause wildfires. That’s true, but no credible scientist has actually ever made the assertion that it does, a rhetorical tactic called a strawman argument. Wildfires are started by lightning or people. What is happening is that the conditions conducive to wildfires have been exacerbated by a warming planet.

The key to a good conflagration is fuel aridity. The drier the wood, the easier it is for a fire to start and spread out of control. So, if you have an extreme drought combined with low humidity, the moisture in wood and grass essentially go to zero.

Our President says the problem is that we need to better manage our forests (you know, rake the leaves and twigs), but it doesn’t matter if a forest is well or poorly managed, if the forest floor is free of undergrowth or the forest is thinned, as the logging industry insists is the only method to manage forests. If the entire region has turned into a tinderbox, any spark, combined with high winds, will cause the kinds of fires we have seen all over the world during the last decade.

Twenty five percent of the Earth’ surface has a longer fire season now. Conditions have doubled the amount of land susceptible to fire. There is a strong linkage between a warming planet and occurrence of fires. Less moisture, more and larger fires.

According to the National Interagency Fire Center, as of October 16th, there were still 63 wildfires burning in 11 states, only 7 of them contained, which burned over 4.6 million acres, 2.5 million of them in California alone. Total US area burned this year is over 8.3 million acres. This year isn’t yet the worst on record for the US, but it’s close and the year isn’t over yet.

And this is just the Western US, from Colorado to California.

The Pantanal region of South America is the world largest tropical wetland. This year twenty two percent of it burned, an area the size of Maryland. Fires in the Pantanal are not unusual. During the dry season lightning-triggered fires burn in the grasslands of the region. But this year, according to an article in Nature, the Pantanal is suffering from its worst drought in 47 years. Given the long-term trend of temperature increase and precipitation decrease, the region’s ecosystem could collapse.

Along the Arctic Circle in Siberia, a six-month drought and heat wave starting early this year led to over 18,000 fires, which collectively burned an area the size of New York state. It’s the second year in a row these fires have occurred. The fire risk in Siberia is only expected to increase with a warming climate. A US scientist who studies Arctic fires stated: “What you would expect is already happening, and in some cases faster than we would have expected.”

You see the pattern here. Increased temperatures lead to increased fuel aridity increasing the fire risk and the length of the fire season, from Australia to Alaska, from the Amazon to the Arctic Circle.

And all we do is react - More fires, more firefighting. Adaption and relocation may be the only options given seemingly inexorable trends and hear-see-speak-no-evil government policies. Maybe grab a rake and head for the woods while we are at it.